We offer you the planetary overview for June 2021. Mercury is retrograde until June 22nd. Jupiter starts moving backwards on June 20th, while Neptune starts retrograde motion on June 23rd. There is a New Moon in Gemini on 10th June and a Full Moon in Capricorn on 24th June.

5th June: Mars in Cancer opposite Pluto in Capricorn 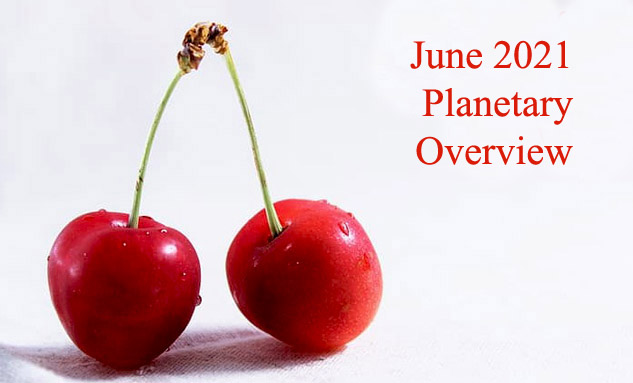 10th June: New Moon in Gemini (Sun conjunct Moon in Gemini). This annular solar eclipse is visible in much of Europe, much of Asia, northern and western Africa, much of Nord America, Atlantic and Arctic Ocean.

20th June: Jupiter retrograde in Pisces (until 28th July), then in Aquarius (until 18th October). The, Jupiter will be back in Pisces on 29th December.

Retrograde Motion of Planets in 2021

23rd June: Venus in Cancer opposite Pluto in Capricorn