We present you the planetary overview for February 2021, based on major astrological aspects and transits. In the first day of the month, Venus enters Aquarius. Then, it will be for the first time after more than a year when a single planet (Pluto) is transiting Capricorn. On 11th February, there is a new moon in Aquarius. Then, on 27th February, there is a full moon in Virgo.

Many people will move towards unconventionality, in their romantic and social relationships. „Human progress has always been driven by a sense of adventure and unconventional thinking“ (Andre Geim) 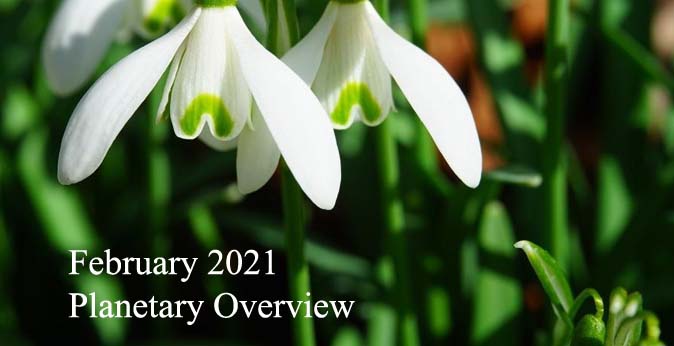 Sun conjuncts Moon in Aquarius. You are looking towards the future and everything that is new seems fascinate and very attractive. Also, it is a good day to meet people and to make new friends. „I would rather walk with a friend in the dark, than alone in the light“ (Helen Keller)

You become more empathetic, more sensitive to others’ feelings. You cultivate empathy and you spend more time helping others. „Empathy is about finding echoes of another person in yourself.“ (Mohsin Hamid)

The planet was retrograde starting 30th January. Mercury encourages original thinking and remembers us that rules are made to be broken. „It is better to fail in originality than to succeed in imitation“ (Herman Melville)

We are able to forgive and to understand. We feel more shy than usual in love matters; we don’t feel like being affectionate in public. „The weak can never forgive. Forgiveness is the attribute of the strong“ (Mahatma Gandhi)

Sun in Pisces opposites Moon in Virgo. You don’t need to start with the big things. Just put one foot in front of the other and break the big goal into little goals you can accomplish one a time, without feeling exhausted or scared. „Tiny details imperceptible to us decide everything!“ (Winfried Georg Sebald)