May 5, 2020 | 2020 Astronomy Calendar, Astrology and Astronomy, The most interesting

We offer you the astronomy calendar for August 2020. Astronomy is the foundation upon which astrology can operate. Actually, astrology and astronomy were treated together, under the Latin name of astrologia, being separated only by the Western 17th century philosophy. One thing is sure: a good astrologer needs to study astronomy. 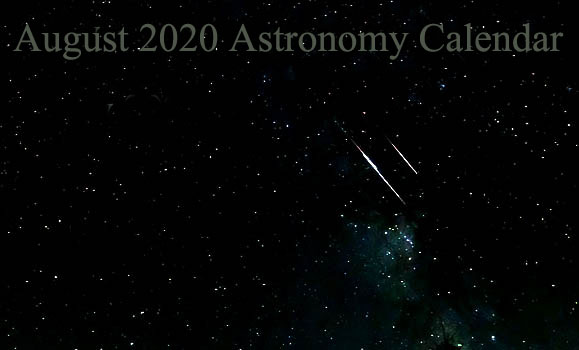 August full moon was known by early Native American tribes as the Full Sturgeon Moon, since sturgeon, a large fish of the Great Lakes and other major bodies of water were most readily caught during this month. This moon has also been known as Harvest Moon, Cow Buffalo Moon, Red Moon, Corn Moon or Green Corn Moon and Grain Moon.

The Perseids are prolific meteor showers associated with the comet Swift–Tuttle. The Perseids are so called because the point from which they appear to hail (called the radiant) lies in the constellation Perseus. The shower runs annually from July 17 to August 24. This year, the meteor shower’s peak will be on the night of August 11th and the morning of August 12th. The nearly full moon will block out most of the fainter meteors this year, but the Perseids are so bright and numerous that it could still be a good show. Best viewing will be from a dark location after midnight

Venus’s orbit lies closer to the Sun than the Earth’s, meaning that it always appears close to the Sun and is very difficult to observe most of the time. It is observable only for a few weeks each time it reaches greatest separation from the Sun – moments referred to as greatest elongation. This is the best time to view Venus since it will be at its highest point above the horizon in the morning sky. Look for the bright planet in the eastern sky before sunrise.