Did you know that there is astrology in Herman Melville’s Moby Dick? In Chapter XCIX of the novel wrote in 1851 by Herman Melville, chapter having the title „The Doubloon“, four different characters offer their own interpretation to the doubloon the captain has declared a reward for the first crewmember to spy Moby-Dick.

The first one who stops to look at the doubloon is Captain Ahab, who interprets the coin as signs of his firmness, volcanic energy, and victory. Then Starbuck, the young chief mate of the Pequod, takes the high peaks from the Ecuadorian coin as evidence of the Trinity. Stubb, the second mate of the Pequod, focuses on the zodiacal arch over the mountains, while Flask, the third mate of the Pequod, sees nothing of any symbolic value at all. 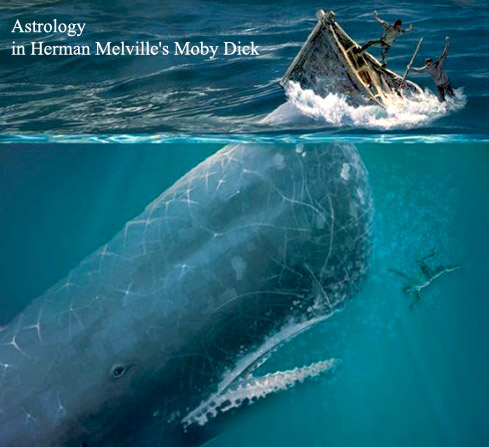 Here is the zodiac interpretation offered by Stubb, who uses his almanac to turn the twelve zodiac symbols into a comical archetype of man’s life from birth to death:

„I’ll try my hand at raising a meaning out of these queer curvicues here with the Massachusetts calendar. Here’s the book. Let’s see now. Signs and wonders; and the sun, he’s always among ’em. Hem, hem, hem; here they are—here they go—all alive:—Aries, or the Ram; Taurus, or the Bull, and Jimimi! Here’s Gemini himself, or the Twins. Well; the sun he wheels among ’em. Ay, here on the coin he’s just crossing the threshold between two of twelve sitting-rooms all in a ring. Book! You lie there; the fact is, you books must know your places. You’ll do to give us the bare words and facts, but we come in to supply the thoughts.

That’s my small experience, so far as the Massachusetts calendar, and Bowditch’s navigator, and Daboll’s arithmetic go. Signs and wonders, eh? Pity if there is nothing wonderful in signs, and significant in wonders! There’s a clue somewhere; wait a bit; hist—hark! By Jove, I have it! Look you, Doubloon, your zodiac here is the life of man in one round chapter; and now I’ll read it off, straight out of the book. Come, Almanack!

To begin: there’s Aries, or the Ram—lecherous dog, he begets us; then, Taurus, or the Bull—he bumps us the first thing; then Gemini, or the Twins—that is, Virtue and Vice; we try to reach Virtue, when lo! comes Cancer the Crab, and drags us back; and here, going from Virtue, Leo, a roaring Lion, lies in the path—he gives a few fierce bites and surly dabs with his paw; we escape, and hail Virgo, the Virgin! That’s our first love; we marry and think to be happy for aye, when pop comes Libra, or the Scales—happiness weighed and found wanting; and while we are very sad about that, Lord!

How we suddenly jump, as Scorpio, or the Scorpion, stings us in the rear; we are curing the wound, when whang come the arrows all round; Sagittarius, or the Archer, is amusing himself. As we pluck out the shafts, stand aside! Here’s the battering-ram, Capricornus, or the Goat; full tilt, he comes rushing, and headlong we are tossed; when Aquarius, or the Water-bearer, pours out his whole deluge and drowns us; and to wind up with Pisces, or the Fishes, we sleep.

There’s a sermon now, writ in high heaven, and the sun goes through it every year, and yet comes out of it all alive and hearty. Jollily he, aloft there, wheels through toil and trouble; and so, alow here, does jolly Stubb. Oh, jolly’s the word for aye! Adieu, Doubloon!“.

Astrology in the movies: Twin Peaks