Pluto’s retrograde motion starts on April 20th, 2017, at 19 degrees Capricorn, and ends on September 28th, 2017, at 16 degrees Capricorn. In astrology, this planet, called „the great renewer“, is associated with power and magnetism, governing wealth, occultism and inner transformation. Pluto is ruler of Aries and Scorpio, having exaltation in Leo, detriment in Taurus and Libra, fall in Aquarius.

In mythology, Pluto was the ruler of the underworld. His Greek name was Hades, being the oldest son of Cronus and Rhea. After he and his younger brothers Poseidon and Zeus defeated their father’s generation of gods, they claimed rulership over the cosmos. Hades received the underworld, Zeus the sky, and Poseidon the sea. The consort of Hades was Persephone, represented by the Greeks as the beautiful daughter of Demeter, goddess of the harvest and agriculture. Persephone (the Roman goddess Proserpina) spend one third (or half, according to roman poet Ovid) of the year with her husband, in the underworld, and two thirds of the year with her mother, above. 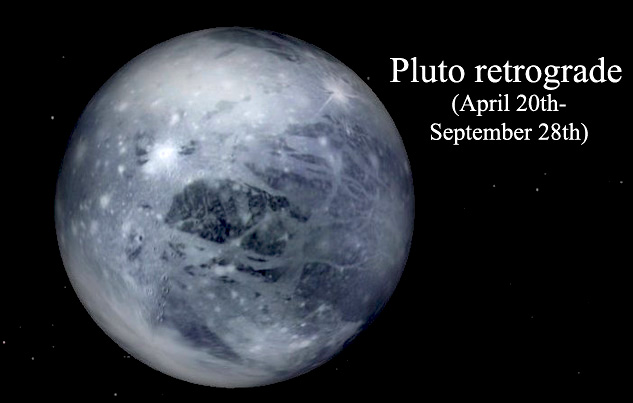 Catabasis or Descent into Underworld

Catabasis is a term designing a hero’s journey to the underworld or to the land of the dead. Then, he returns on earth with a quest-object, a loved one or with heightened knowledge. There are many mythological characters who make visits to the underworld ruled by Pluto. We remember you some of the best known:

Descending into Your Personal Underworld

Pluto retrograde invites each of us to descend in our personal underworld. How? You have to confront your fears, because they will never just go away, if you ignore them.

Aries – you have to deal with difficult people at work. You also must learn to speak in public with confidence.

Taurus – you have a stronger desire to explore remote places, to understand different cultures. You can start your spiritual journey.

Gemini – intimacy becomes more important than ever, in your relationship. Some Geminis become attracted to taboo things.

Leo – you have to take care of your own health. You’ll need a lot of energy at work.

Virgo – you will probably feel more love and compassion for yourself and for others. You need to learn how to express these feelings.

Libra – old experiences, especially things from your childhood, resurface. You need to find the source of your fears and anxieties.

Scorpio – dealing with some people can make you feel frustrated, angry and even despairing. Identify these people and avoid them, if this is possible. If you can’t, set some clear limits or solicit the help of a mediator.

Sagittarius – You will re-evaluate what you want or what you think you need. What are you working for?

Capricorn – you need to re-evaluate who you really are. This is an inspiring quote for you, during this transit: „You’ll never know who you are unless you shed who you pretend to be” (Vironika Tugaleva)

Aquarius – this is the time when your secrets come to the surface. You need to be more sincere.

Pisces – it’s time to re-evaluate friendships. Maybe, at the end of this transit, you will have a friend or two less. But the remaining friendships will be stronger.

An Ancient Hymn dedicated to Pluto

Subterranean is your dwelling place, O strong-spirited one,

A meadow in Tartaros, thick-shaded and dark.

Plouton, holder of the keys to the whole earth.

You give the wealth of the year’s fruits to mankind,

And to your lot fell the third portion, earth, queen of all,

Seat of the gods, mighty lap of mortals.

Your throne rests on a tenebrous realm,

And on dark Acheron that encompasses the roots of the earth.

All-Receiver, with death at your command,

you are the master of mortals.

Euboulos, you once took pure Demeter’s daughter as your bride,

When you tore her away from the meadow and through the sea.

Upon your steeds you carried her to an Attic cave,

in the district of Eleusis,

Where the gates to Hades are.

You alone were born to judge deeds obscure and conspicuous.

Holiest and illustrious ruler of all, frenzied god,

You delight in the worshiper’s respect and reverence.

Come with favor and joy to the initiates. I summon you.