In November 2017, for the third time in the last twelve months, Saturn in Sagittarius trines Uranus in Aries (first time was in December 2016, second time in May 2017). Now, you can successfully use both tradition and novelty. On November 22nd, Neptune is again direct in Pisces, after five months of moving backward.  It will be easier for each of us to distinguish between dreams and reality.

November 4th: Full Moon in Taurus (Sun in Scorpio opposite Moon in Taurus) – You need to be grounded in the practical and material realities of life. Work and money are your priorities. Celebrate this Full Moon walking barefoot on the earth! „Get yourself grounded and you can navigate even the stormiest roads in peace“ (Steve Goodier

November 4th: Venus in Libra opposite Uranus in Aries

November 5th: Mercury enters Sagittarius – optimism and self-confidence help you to succeed. Tolerance and open mindedness are the most important values, during this transit. „A mind is like a parachute. It doesn’t work if it is not open“ (Frank Zappa)

November 7th: Venus enters Scorpio – you tend to have an „all or nothing“ approach in relationships. You are very passionate, but you must learn to overcome jealousy. „The jealous are troublesome to others, but a torment to themselves“ (William Penn)

November 11th: Saturn in Sagittarius trine Uranus in Aries – you can successfully use both tradition and novelty. Even on the political scene, conservatives and reformists groups negotiate and even start collaboration. „Tradition is a guide and not a jailer“ (W. Somerset Maugham) 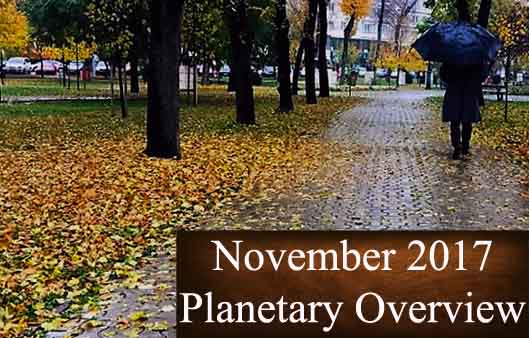 November 22nd: Sun enters Sagittarius – you need to connect to something greater than yourself. You set high goals and religion and spirituality may help you to reach them. „Quiet the mind, and the soul will speak“ (Ma Jaya Sati Bhagavati)

November 22nd: Neptune direct in Pisces – Neptune became retrograde on June, 16th, warning us about the risks of uncontrolled imagination. Now, it will be easier for all of us to distinguish between dreams and reality. „Dreams don’t work unless you take action. The surest way to make your dreams come true is to live them“ (Roy T. Bennett)