Lucaria, the Roman Festival of the Grove (July 19 and 21)

Lucaria was a Roman festival, held July 19 and 21. In ancient Roman religion, a „lucus“ was a sacred grove. Apuleius, the ancient author of „Metamorphoses“ or „The Golden Ass“ informs us that „when pious travelers happen to pass by a sacred grove (lucus) or a cult place on their way, they are used to make a vow (votum), or a fruit offering, or to sit down for a while“.

This festival was celebrated in the location of a sacred grove situated between the River Tiber and the Via Salaria, the ancient salt route connecting Rome and the marshes at the mouth of the Tiber. 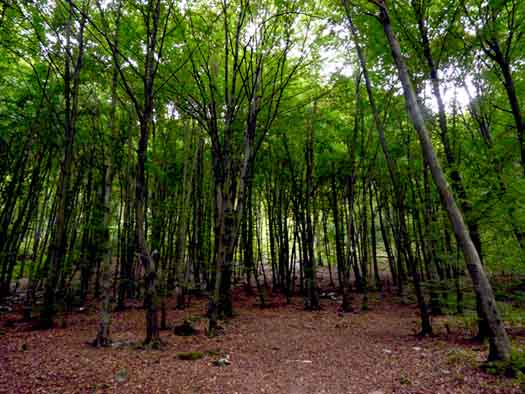 During these Feasts of Groves or Feasts of Clearings, the Roman farmers cleared the land to be used during the next growing season. The deity for whom Lucaria was celebrated is unknown and the invocation was deliberately anonymous. The Romans developed a formula for prayer to a particular genius of unknown name: „si deus, si dea“ („whether god or goddess“). This is a prayer, recorded by Cato the Elder, in „On Agriculture“ („De Agri Cultura “), for divine permission to clear a grove, prayer that illustrates how such unknown deities were approached.

„The following is the Roman formula to be observed in thinning a grove: a pig is to be sacrificed and the following prayer uttered: «whether thou be god or goddess to whom this grove is dedicated, as it is thy right to receive a sacrifice of a pig for the thinning of this scared grove, and to this intent, whether I or one at my bidding do it, may it be rightly done. To this end, in offering this pig to thee I humbly beg that thou wilt be gracious and merciful to me, to my house and household and to my children. Wilt thou deign to receive this pig which I offer to this end».

If you wish to till the ground, offer a second sacrifice in the same way, with the addition of the words: «for the sake of doing this work». So long as the work continues, the ritual must be performed in some part of the land every day; and if you miss a day, or if public or domestic feast days intervene, a new offering must be made“. (Cato, On Agriculture, CXXXIX, CXL).