Lilith and Love in Astrology: Normality and Deviance

How Lilith influences love in astrology? Lilith is the darkest place in our natal chart. Studying her means to study our deepest subconscious fears, desires and fascinations. Lilith is the name given to a hypothetical second moon of Earth. There is also an asteroid named Lilith, discovered in 1927 in the middle region of the asteroid belt located between Mars and Jupiter. But, for contemporary astrologers, the name Lilith designates to a point on the horoscope that represents the second focus of the ellipse described by the Moon’s orbit. The Earth is the first focus and the apogee lies in the same direction.

Lilith stays in each sign of the Zodiac for exactly 9 months. It takes 8 years and 10 months to complete its circuit around the zodiac. But, beyond Lilith’s mathematics and geometry, what is her meaning and significance in astrology? How does it influence our lives? 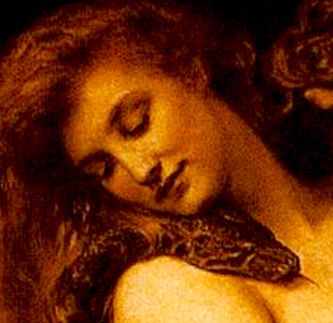 This is one of the worst ways in which an affected Lilith can influence your love life. Erotophobia is a morbid aversion to the thought of love and to its physical expression. It has many possible manifestations. For example, one could feel an irrational and potentially debilitating fear of some object, person or act that is related to love making. This results in an impossibility to make love, even with someone who he (or she) really likes.

Astrologically speaking, this problem could be indicated, on the natal chart, by a Lilith in Virgo or Capricorn, making bad aspects with a strong Saturn, planet of sorrow and privation. Other personal planets, like Venus, Mars and even Mercury, could also play a role, in such a problem. Depending of what other planets are implied, erotophobia can be associated with other psychological problems, like social phobia or avoidant personality disorder.

A man who has physical relationship with a large number of women is called a stud, a player, a womanizer or a rake. Some of these words clearly express approval or even admiration. Famous seducers (fictional, like Don Juan, or historical, like Casanova) are admired like heroes. Every man wants to be James Bond, isn’t it? And James Bond has slept with over 50 women, until now. From a woman’s perspective (and also from an objective point of view), a womanizer is not at all a hero. But what indicates a womanizer, in a natal chart?

Some of the most common predispositions of adultery and cheating are related to Lilith, for example Lilith in bad aspect with Mercury or a bad aspected Lilith in signs or houses ruled by Mercury. The Black Moon influenced by the expansive planet Jupiter, in the sign ruled by this planet (Sagittarius) or in a house having Jupiter as ruler can also indicate a man who will have a lot of love affairs. Mars, the planet expressing the masculine energy, has also a role to play, when making bad aspects with Lilith.

In the Jewish mythology, Lilith is considered Adam’s first wife. Some myths tell us that she left Adam after she refused to become subservient to him and then would not return to the Garden of Eden after she had coupled with the archangel Samael (poison of God), also a seducer and a destroyer. She then became goddess of the demons called succubi. Lilith is described as an evil, but very beautiful woman. She can transform herself into a butterfly-like demon and is associated with the power of seduction.

So, female promiscuity is directly linked to Lilith. The terms used to describe a promiscuous woman do not express approval and admiration, like in the case of men. Women with more than one single partner were called sluts and even strumpets or whores. Of course, from an objective point of view, there is not great difference between a man who cheats and a woman who cheats her partner.

What aspects of Lilith indicate a frivolous woman, in a birth chart? Bad aspects between Lilith and Venus, the planet expressing the feminine energy, could indicate promiscuity. Like in the case of man, Lilith in bad aspects with Mercury and with Jupiter can also indicate a woman with a large number of male partners. 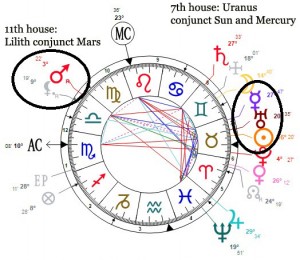 But, astrologically speaking, we must not forget one fact: on Freud’s natal chart, a retrograde Lilith is conjunct with Mars (masculine energy) in 11th house, governed by Uranus, planet of rebellion, surprises, non-conformism and eccentricity. Uranus is a strong planet on Freud’s birth chart: conjunct with Sun and Mercury, in Taurus and the house of relationships. Actually, this is one essential indicator of perversity on a natal chart: any aspect between Lilith and Uranus in a sign of water (Cancer, Scorpio or Pisces) or in a sign or house ruled by Uranus. Of course, it indicates only a predisposition, it doesn’t mean than everyone having these aspects will manifest deviations. That depends on many other aspects on the birth chart.

WHAT ABOUT A WELL-ASPECTED LILITH?

A well aspected Lilith indicates a normal love life. Of course, each of us decides what is and what isn’t normal for him (or for her). Loving, feeling loved and fulfilled in a relationship is what each of us wants. Well used, even Lilith can help us to achieve that goal. Because becoming aware of our deepest subconscious fears, desires and fascinations will give us immense power. But we’ll talk about this another time.

Do you want to know more about Lilith and love predispositions in your birth chart (or your partner’s)? CONTACT US for a detailed analysis of Lilith’s aspects and position in sign and houses, on your birth chart. 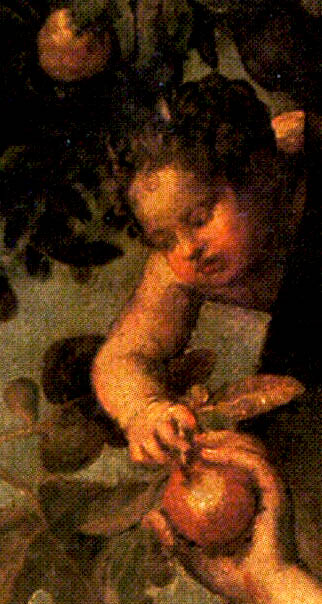