Strength is the eighth Major Arcana in Rider Waite tarot deck and the eleventh in the Tarot of Marseilles and in the Thoth tarot deck (where is called „Lust“). Another traditional name of this major arcana was „Fortitude“.

Traditionally, Strength was the eleventh card and Justice the eighth, but Waite switched their position, decision based on astrological correspondences. Today, Strength has the eighth position especially in the English-speaking world and the eleventh in the rest of the world, but both placements are considered valid.

Waite about Strength: the Confidence of Those Whose Strength is God 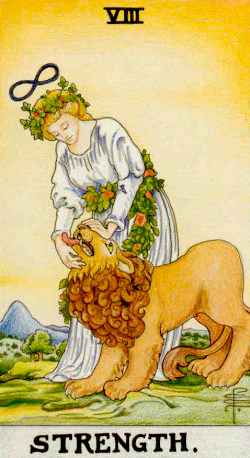 The divinatory meaning of Strength is, according to A. E. Waite, expressed by the following words: „ power, energy, action, courage, magnanimity; also complete success and honours“.

When it is reversed, this card can signify: „despotism, abuse if power, weakness, discord, sometimes even disgrace“.

In his chapter about the doctrine behind the veil, Waite explains this Greater Arcana as follows: „ The card has nothing to do with self-confidence in the ordinary sense, though this has been suggested– but it concerns the confidence of those whose strength is God, who have found their refuge in Him. There is one aspect in which the lion signifies the passions, and she who is called Strength is the higher nature in its liberation. It has walked upon the asp and the basilisk and has trodden down the lion and the dragon“.

Oupensky about Strength: Power of Love, Power of Unity, Power of Infinity

In his journey, Ouspensky received detailed explanations from the Voice, when he meets the woman with a lion. For him, the name of this Greater Arcana is „The Power“ and he explains that here are presented three types of power:

Crowley about Strength: the Joy of Strength Exercised 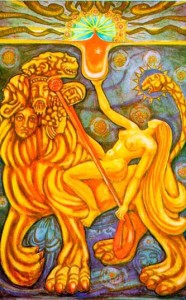 In „The Book of Thoth“, Aleister Crowley connects this Major Arcana (which he calls Lust) with the sign of Leo in the Zodiac, ruled by the Sun, and with the Hebrew letter Teth.

This is how the occultist explains his choice to name this card Lust, and no Strength: „this Trump was formerly called Strength. But it implies far more than strength in the ordinary sense of the word. Technical analysis shows that the Path corresponding to the card is not the Strength of Geburah, but the influence from Chesed upon Geburah, the Path balanced both vertically and horizontally on the Tree of Life (see diagram). For this reason it has been thought better to change the traditional title. Lust implies not only strength, but the joy of strength exercised. It is vigour and the rapture of vigour“.

Papus about Strength: Strength and Vitality 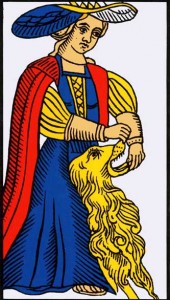 For Papus, Strength is not the eighth – like in Raider-Waite Tarot – , but the eleventh card of the Tarot.

The French occultist says that „only two ideas are expressed by this arcanum:

Analysed on multiple levels, Strength offers us the following interpretation: 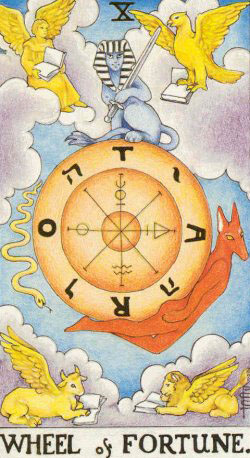 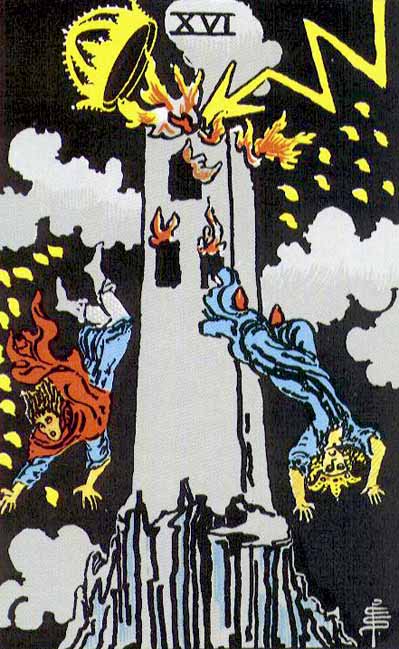